​Bloomer strikes the winner after a grand display
at the Wood's Lane Ground. 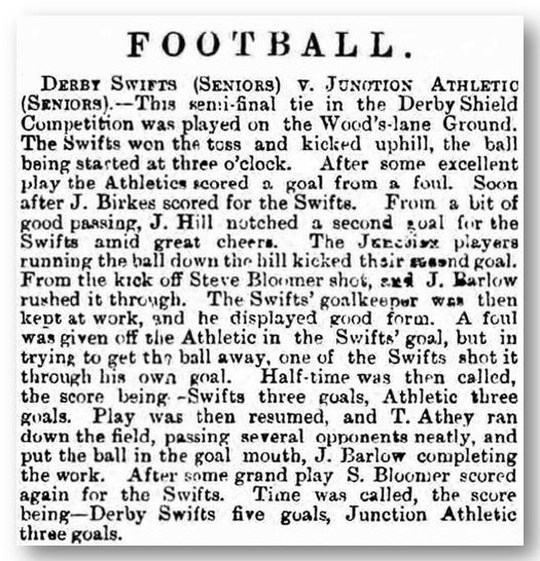 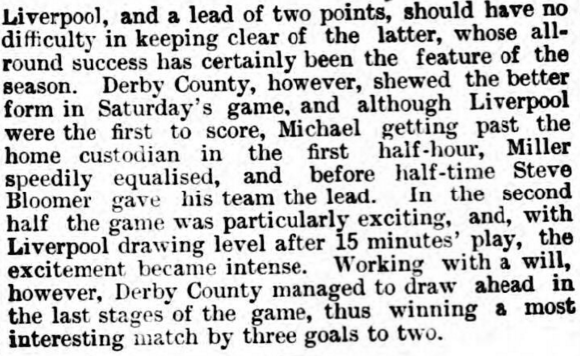 For the first match of the season 2,500 turned out in pouring rain at Bramall Lane to watch United beat a Derby County side including England legend Steve Bloomer 2-1. The scores were level with ten minutes to go, with Bennett scoring for the Blades and Derby having missed a penalty. With time ticking by Almond struck the ball so hard into the Derby goal that it went straight through the netting. The referee waved away United’s appeals and refused to look at the net. Instead he consulted the nearest linesman who was also the Derby trainer. The goal was disallowed. With a few minutes left, Ernest 'Nudger' Needham struck a free kick from 25 yards. The Derby keeper fumbled it and the ball trickled over the line.
triumphanddisastersufc.blogspot.com
​A History of Sheffield United FC
25th February 2010
FA Cup Semi-Final
Everton 1-3 Derby County (Bloomer 2, J.Goodall 1)
Molineux, Wolverhampton
​19th March 1898
Attendance: 30,000 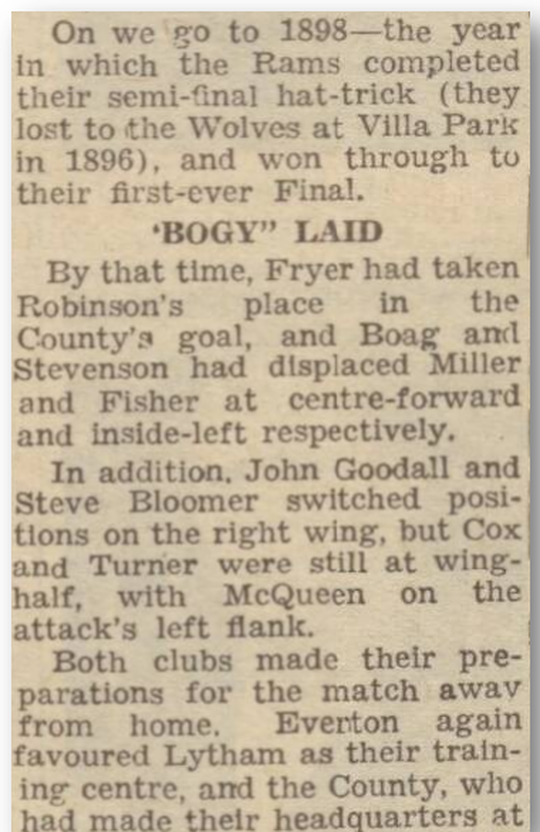 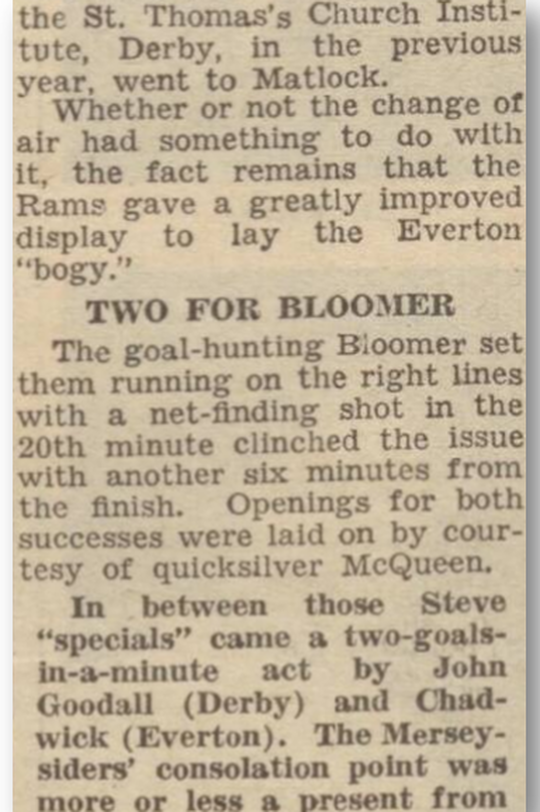 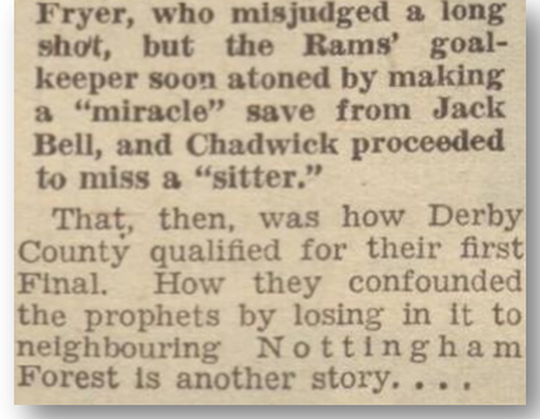 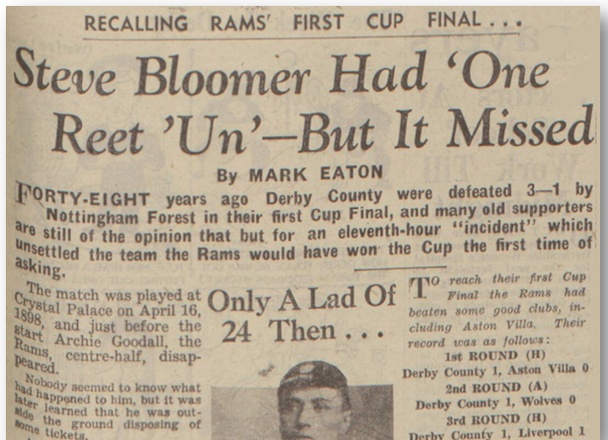 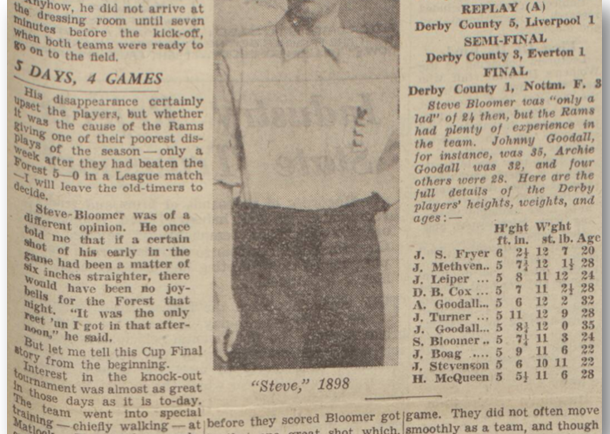 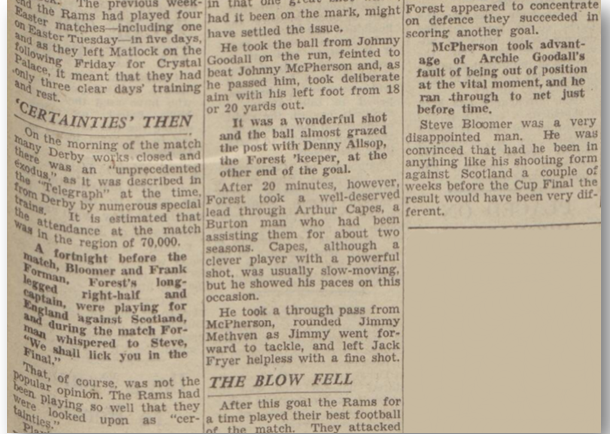 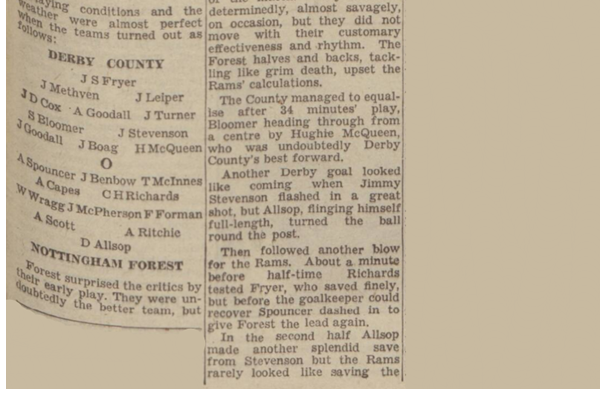 ​One week later Derby played Sheffield United again at the Baseball Ground and
​ won 1-0. Both had virtually the same teams playing. Bloomer scored the winner. 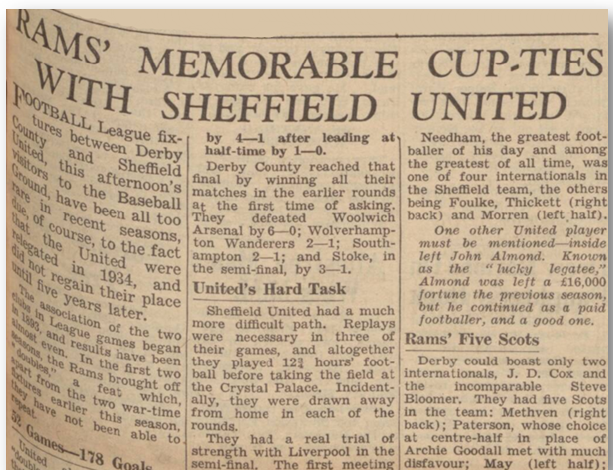 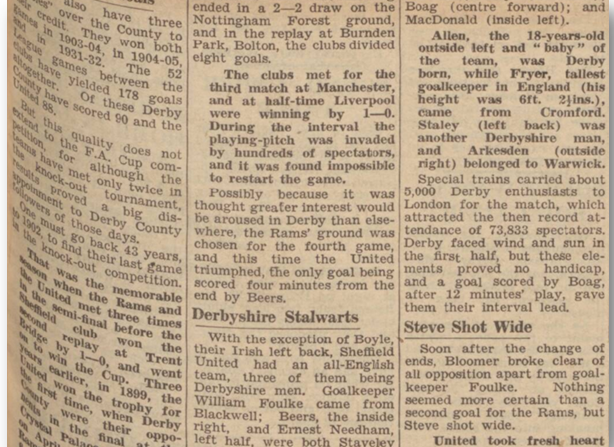 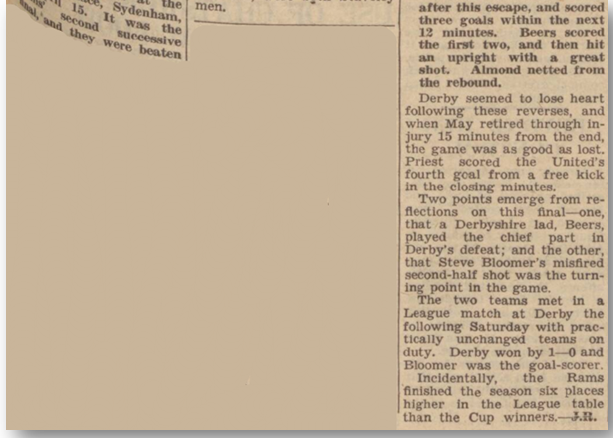 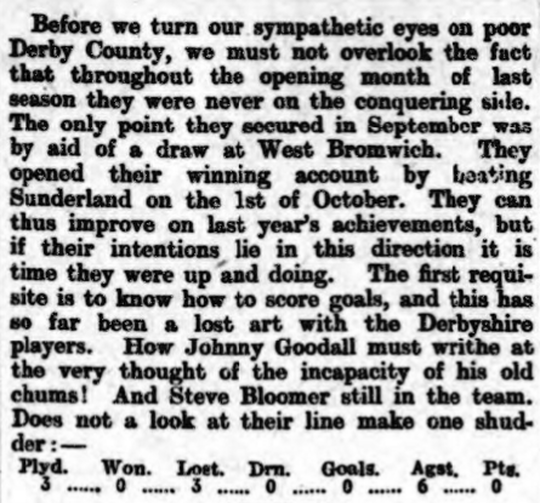 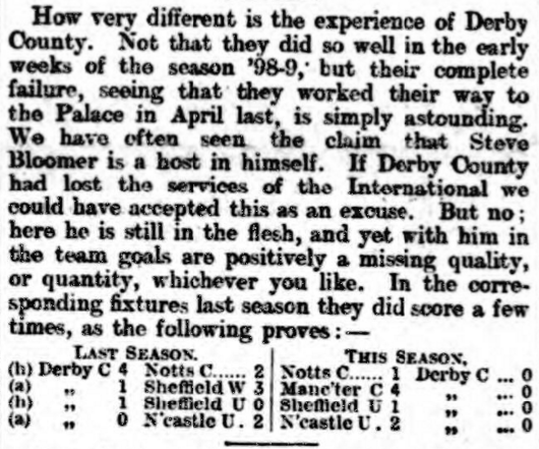 The day was gloriously fine, and well suited for the occasion, the ground being in perfect condition. Liverpool made several changes in the constitution of their eleven, owing to the unlooked-for results of the previous games. Derby were strongly represented, and their previous week’s victory gave them confidence for the encounter.

1st Half:
Liverpool started with the sun facing them, and racing away immediately on the right Cox sent across a capital centre, which was bungled by the inside men. This was practically the state of affairs for some time, Liverpool penning their opponents, but finding the Derby defence sound, though, in spite of this, several openings were allowed to slip past.

The visitors rarely got going, but their right wing was well attended to, Bloomer being afforded every chance of making headway.
A foul against Liverpool let in the Peakites, and a bully in front of the home goal ensued, from which Arkesden sent in a fast high shot, which Perkins brilliantly cleared.

This was replied to by a fine spurt on the home right, Cox racing past all opposition, only to find his shot tipped over the bar by Fryer.

The game continued mostly in favour of Liverpool, for though Bloomer tried hard to get away Dunlop and Goldie were too clever for him.
Endless openings were afforded the home forwards, but they proved dreadfully weak in front, the inside man repeatedly failing to utilise the centres which mostly originated from Cox or Robertson.

GOAL: Derby made some spasmodic efforts, but at length Bloomer drew the defence around him, and then, sending across to the left wing, which was almost unprotected, Cooke dashed in, and dashing into goal put in a fine centre, which would undoubtedly have scored, but Bloomer who had raced up, touched the ball into the net, and obtained the first goal. Thus Liverpool, who had almost monopolised the play up to this juncture, found themselves a goal behind.

They fared no better up to half-time, though Morgan missed a certain score by overrunning the ball when only a few yards from Fryer.

2nd Half:
The second half opened in sensational fashion, the home forwards carrying the ball straight through the Derby defence, and Raisbeck, receiving in front of goal, made a very feeble attempt to score.

GOAL: From the kick out the visitors got away on the right, and sending across, some bustling play took place in front of Perkins, and the ball was driven here and there until it finally wriggled over the line, Bloomer evidently again giving the final touch.

The remainder of the second half was almost a repetition of the first.
Liverpool could do anything but score, but about a quarter of an hour from the finish they made a desperate attempt to open their scoring account. Several shots were rained upon the visitors’ backs, and repeated corners led to no decisive result.

Either the shot was charged down or sent wide, and the visitors’ backs, acting with coolness, managed to hold their own. With no success attending their efforts Liverpool fell away, and Derby were more dangerous in the last minutes of the game than at any previous time.
Boag got through the backs, and had only Perkins in front of goal, but the Liverpool custodian ran out and kicked the ball away just as his opponent was about to shoot.

The visitors were pressing at the finish, and finally won. 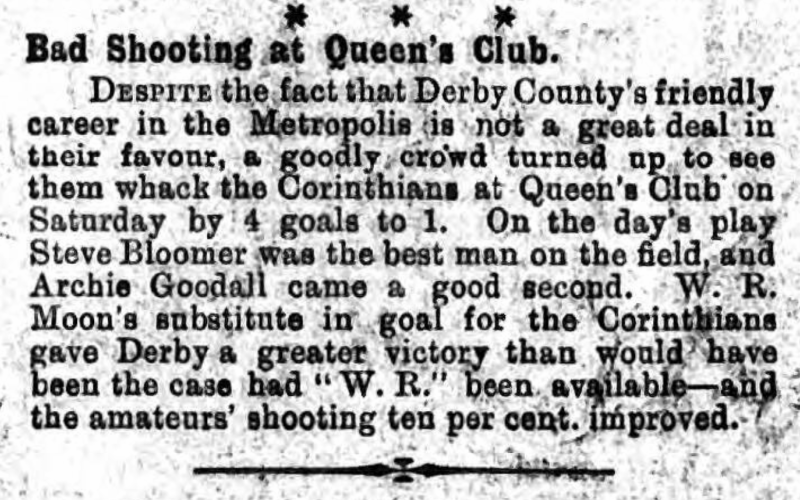 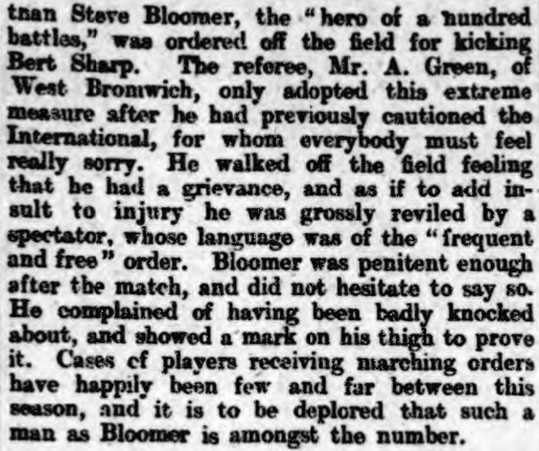 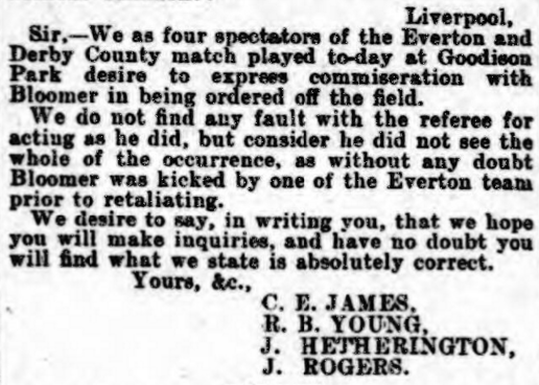