Bloomer described as "a magnificent player...brilliant in the extreme" scores at the opening of WBA's new ground. 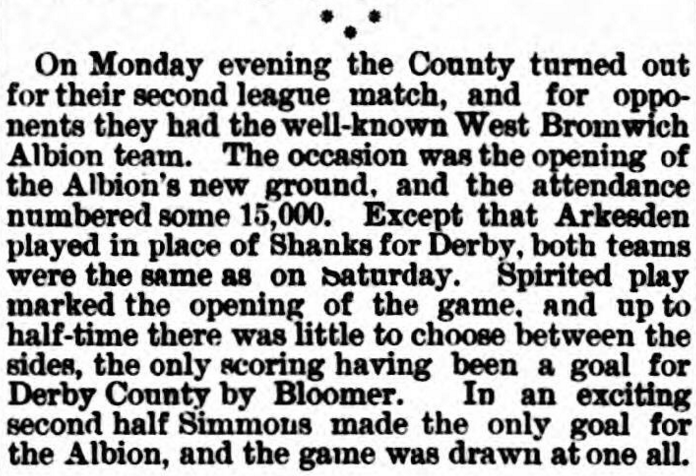 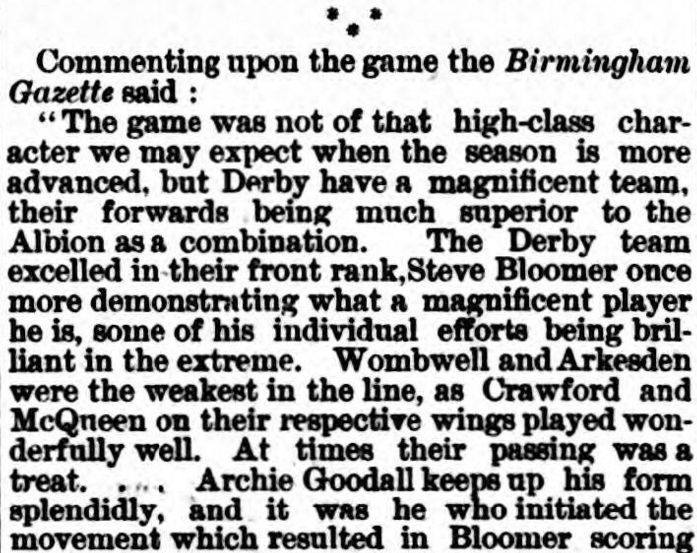 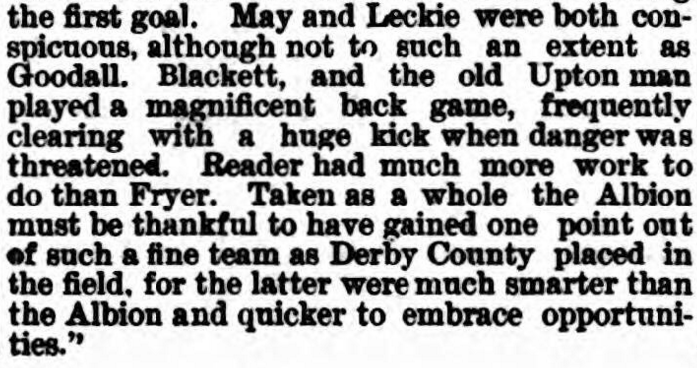 1st Half:
Punctually to time Raybould started operations, and the opening stages were fast and interesting. Liverpool were the first to exert pressure, but dallying in front of goal, enabled the Derby backs to clear. The visitors retaliated with a neat passing movement, and forced a corner from which Goodall made a very wild attempt to score.

Both sides indulged in smart footwork, and McQueen with a long shot just skimmed the bar, whilst a few moments later Bloomer, when close to Perkins, had his shot charged down by Raisbeck. Liverpool took up the running, and McGuigan tricking Luckie gave to Robertson, who forced an abortive corner.
The latter again sprinted along gaily, and transferred to McGuigan, who was charged down when open goal was before him.

The Derby forwards displayed capital form, and were with difficulty held in check.

The home backs, amongst whom Raisbeck was very prominent warded off every attack, and it was just as well that the defenders were so determined, for Bloomer and his confreres were decidedly dangerous when on the move.
At length Cox raced round Morris, and centred, but McGuigan failed by inches to reach the ball, or a goal must have resulted.

The Liverpool front rank did not show their customary combination, and Fryer was rarely called upon. Another dash by the home right led to McGuigan giving to Raybould, who was splendidly placed, but offside was successfully claimed.

Play became more even, but the Liverpool front rank was by no means deadly near goal, and by dallying spoiled many fine openings. Goodall was penalized just outside the twelve yards’ line, and from the free kick a corner resulted, but the whistle blew just as the ball was sailing towards the centre. The interval thus arrived with the score sheet blank.

2nd Half:
Restarting, Derby attacked straight away, and Boag racing past the backs gave Perkins a teaser, which the custodian saved at full length. Liverpool retaliated and gained a corner, which was badly taken, but from a second, resulting from a capital shot by Cox, Robertson headed over the bar.

The home forwards did not show much improvement but eventually smart passing on their left wing have Hunter an opening, and the inside man failed by the merest shade to score.

Derby broke away, and Crawford, sending across, Boag received when only a couple of yards from Perkins, who effected a miraculous clearance. The ball hovered in dangerous proximity to the home goal, but relief came at last, and the Liverpool supporters once more breathed freely. A beautiful chance was afforded McGuigan shortly afterwards, the ball coming to him from the left but, with only Fryer to beat, he sent yards outside.

Derby paid a temporary visit to the home goal, but Liverpool rushed back, and Raybould when close in shot hard against the upright. Liverpool completely nullified all their efforts by their struggling work in front of Fryer, and Derby breaking away, Bloomer obtained possession, and skimmed the posts with a terrific shot.

The Peakites defended with stubborn persistency, though Liverpool did not attack with the vigour that was likely to gain any tangible point. Crawford missed a grand chance of scoring five minutes from time by shooting wide, but the final whistle blew with the score as at half time.

The display given by the Liverpool forwards was distantly disappointing. There was a total lack of understanding amongst them, but the chief weakness was the inability to send in a decent shot. They finessed and juggled with the ball when a shot was necessary, the consequence being that the Derby backs invariably cleared their lines without having recourse to the assistance of Fryer. Not one of the forward line showed his real form, but Robertson on the extreme right was the most conspicuous failure. Possibly Walker’s absence upset the machinery of the quintet, but this could not be urged as an excuse for the miserable dallying in front of goal. The half-backs were more successful, and the backs, though kicking strongly, often exercised considerable lack of judgment. Perkins was the saviour of his side, and following as it does his fine display against the Forest, proves the Liverpool custodian to be one of the most reliable players in the team. The Derby forwards were extremely smart, and it was a distinct slice of good fortune which enabled Perkins to clear from Boag when the latter seemed to have a certain goal ahead. 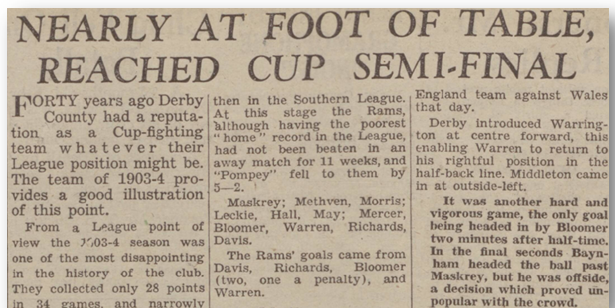 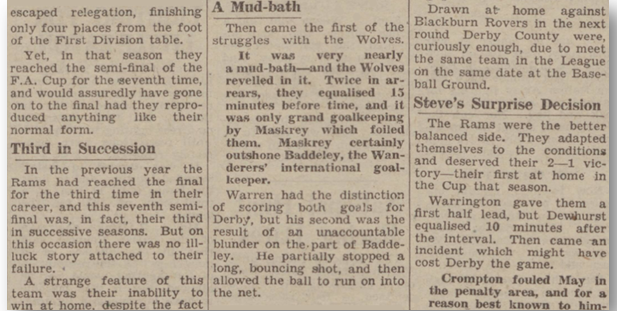 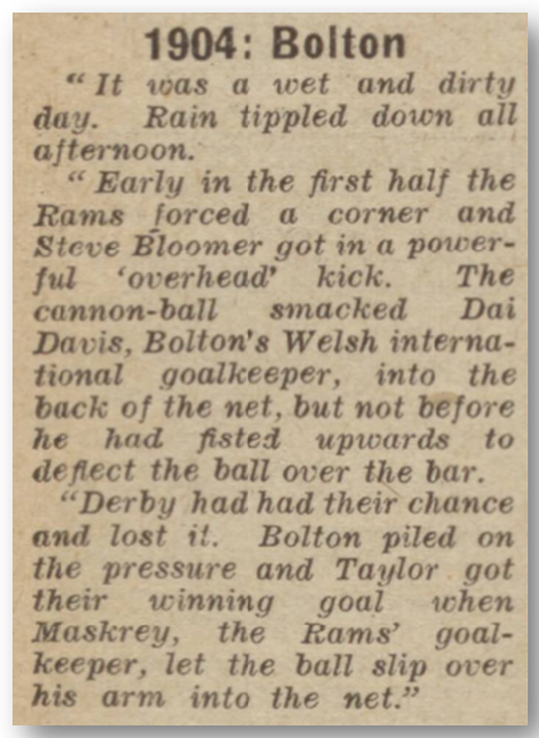 Saturday last was the Derby Day of Liverpool. The men from that town visited Anfield Road with a clean  record : they had beaten Aston Villa, Newcastle United and other good clubs, and had not bowed the knee themselves to anybody. Beside, in five encounters Maskrey had only been beaten once, and that by poor, despised Bury on the opening day. It will thus be seen that Liverpool were faced by no mean opponents, and that they had to put their best foot forward to cope with them.

I fully expected there to be a falling off in the number present, but evidently the name and fame of the Rams had preceded them, and the crowds rolled up tremendously, despite the fact that rain threatened. All hands were present and there was quite a thrill of relief when it was seen that Dunlop was out. Raisbeck, as is duty bound, won the toss, but there was not a great deal of advantage in doing so. From the kick off fast was the word, and how the ball travelled. Maskrey received a rare bombardment, but whether by good luck or good management, he managed to save his goal. In the mean time Derby were not idle, and every time they broke away things looked dangerous. Dunlop evidently thought this, because once he stopped Bloomer with a forcible charge just outside the penalty line. The referee awarded a free kick which Warren took. Doig was prepared for the shot, but the ball struck another player and went at a sharp angle into the corner of the net.

The first goal instead of depressing the Livers stimulated them, and they speedily got their opportunity. Methven had gone off, and, aided by some offside rulings, the Rams were attacking. The ball went out to Cox, who was just on side, and he flew away straight for goal. Morris missed him, and he missed Maskrey, but hit the space between the nets. It was a thrilling episode well executed. Perhaps in view of the exhibition of Maskrey evens was a fair reflex of that first half.

In the second half there was no holding the home team. They came down the field in a line time and again, and when Robinson headed a second goal from a clinking centre of Bradley’s the result was a certainty. Shot after shot was rained on the visiting goalkeeper, and the last one passed him. Morris nipped in and kicked out, but he was too late – the ball, in the opinion of the referee, had crossed the rubicon, and it was a good decision. Goddard claimed the third goal. The fourth was a beauty. Robinson and Goddard took the ball down after Cox had passed across and the ball was middled by Goddard. Somehow Cox had got into the centre and he, supported on either side by Raybould and Hewitt, went on a few strides and then shot. It was irresistible and a peculiar feature was that all three were so placed that they could not have failed to net the ball.


Great Half Back Play

The Liverpool halves were a great trio, but Bradley was the pick of them. Raisbeck and Parry were clever, but the left half was superb. I never expect to see a man play a better game. He has formed a perfect understanding with Cox and Raybould, and these men in consequence gave of their best, Cox was brilliant and he was well supported by Raybould. To some extent both the goals of Cox were due to individual brilliance, but the second was led up to by some excellent collective work. Hewitt is quite a glutton for work, and he is improving rapidly in his unaccustomed position. Parkinson will indeed have to look to his laurels. Robinson and Goddard were hard working, and did their share, for they halved the scoring. Robinson was ever in the thick, and Goddard was frequently noticeable for defensive as well as offensive play.

Dunlop undoubtedly ? the defence, and apart from his own work exercises a salutary influence on his comrades. West did better than the week before, and Doig was only beaten by a shot that would have beaten any man.

Derby had a ? gruelling, but were beaten by a bigger, faster, and cleverer team. Maskrey was in rare form and good for the County it was. The backs also had a lot to do, and only gave in after great pressure. The halves were at full stretch, but never properly held their opponents, and Hall was the best of the three. In consequence, the forwards, of whom Bloomer, and Paton were most conspicuous, never got into their stride. Occasionally, and especially in the first half, they put in some pretty bits, but they got little chance of showing their ability after change of ends.

There is no doubt that Liverpool played a great game. Their first movements inspired confidence, and they have only to get on the field at Owlerton in the same way to win there – hard a task as it is. Games like this with Derby are long remembered, and will always bring their own reward in the shape of large gates. 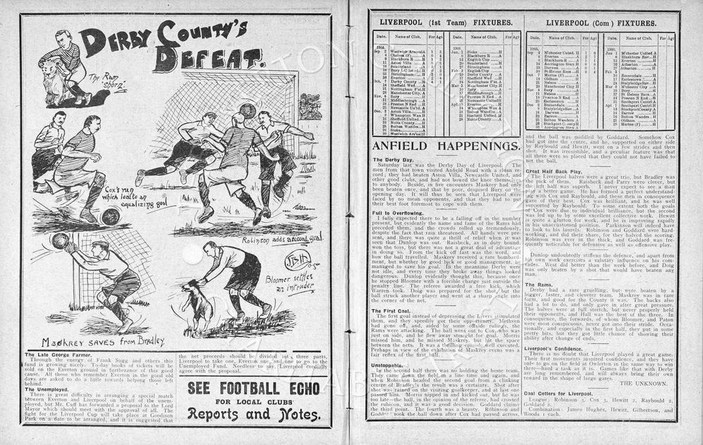